Home Food And Drinks The first Thai restaurant in the US was in Denver – here...

Chada Thai is widely recognized as the premier Thai restaurant in the United States. It opened in Denver in the early 1960s – despite the city’s longstanding cowtown image. The restaurant’s late founder, Lily Chittivej, moved to the city from Thailand after visiting her husband here in 1960. He was a doctor.

“I want my children to have a good education in a civilized country,” she wrote in Lily’s Cookbook, a collection of the restaurant’s most popular recipes. “There is no place in Thailand for all bright students … Here the children have a chance.”

The cookbook is the latest addition to The Kitchen Shelf, the vintage cookbook series from Colorado Matters. A copy belongs to Holly Arnold Kinney – a Colorado restaurateur herself. She owns the Morrison fort, which specializes in Old West food.

Kinney has a large collection of cookbooks in her basement library – including Lily Chittivej’s. But it is more deeply connected to Chada Thai. Kinney’s father, renowned food historian and critic Sam Arnold, was very close to Chittivej. As a child, Kinney remembers visiting the original Chada at 408 E. 20th Ave.

(A restaurant of the same name is still in operation today – it is run by another family.)

Kinney has vivid memories of the first place. “The funnest thing was when you were walking around the restaurant and all these great decorations and costumes by Thai dancers were hanging on the wall,” Kinney recalls. “I was fascinated by the long brass fingernails that Thai dancers use to place their hands on to emphasize their hand movements and the jeweled crowns they would wear while dancing.”

However, the memory Kinney lined up the day we visited her kitchen at home was based on taste. She prepared “Pasta with Crab Curry” from “Lily’s Cookbook”. “I haven’t really had it since I was a little girl in Lilly’s restaurant,” she says.

While the recipe gives you the option to purchase fresh or canned crabs, Kinney went out of her way and bought fresh Dungeness crabs.

According to the cookbook, the dish at Chada Thai Restaurant was a favorite: “Many customers love this dish for lunch. It’s a real Thai dish because of its curry taste. “

Kinney, who used fettuccine in her version, explains that “Chadha Thai didn’t have a lot of Thai noodles to choose from in the 1960s, and Lilly thought spaghetti and linguini were good noodles from the Italian communities here. And it was familiar to many Americans. That’s why she always used spaghetti or linguine in her recipes. “

Kinney sits down at her table and twists her fork in the hearty noodle bowl – carefully to skewer crabs. Her reaction? Simply: “Mmmmmmmmmm.”

But her moment of taste nostalgia is associated with a touch of sadness. Kinney had to make this recipe from a photocopy of the original cookbook. She had taken the original from her basement and placed it on the kitchen counter. While she was buying ingredients, her mix of golden retriever and cattle dog Frenchie snatched them up and chopped them up. Kinney returned home, saw the cookbook itself had become a meal, and was beside herself.

“It was such a grieving moment for me.”

So she went for a walk, met a neighbor, and shared her loss. The neighbor’s answer left Kinney speechless.

According to Kinney, this is a testament to how popular Lily Chittivej’s dishes have been with longtime Denverites. 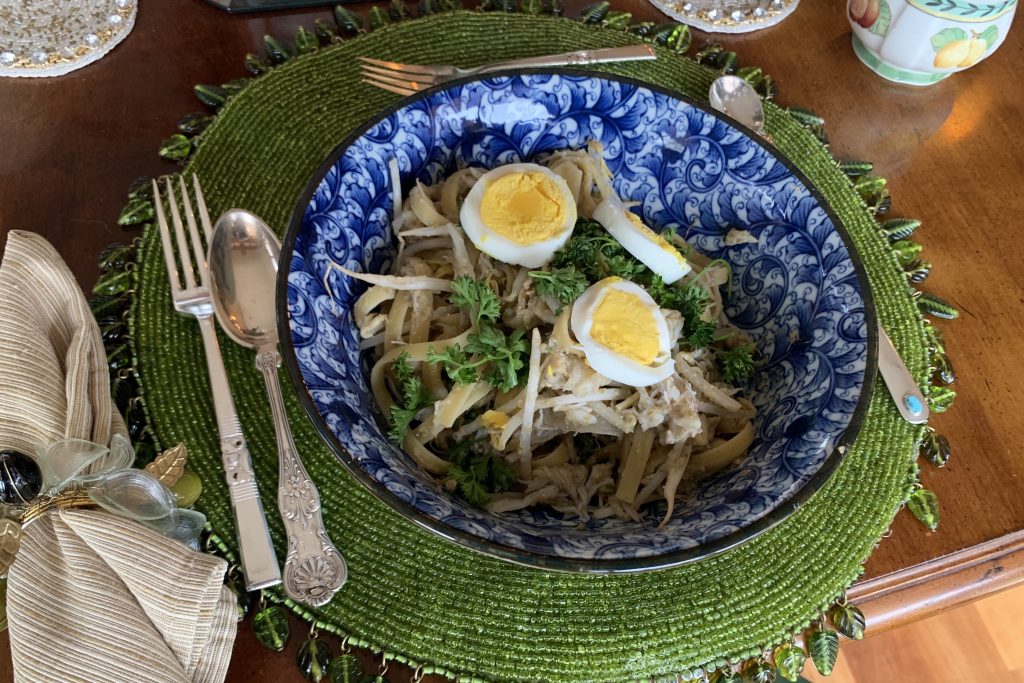 Cook the pasta according to the instructions. Heat the bean sprouts and shrimp and spread on the noodles. Pour the curry sauce on the pasta and decorate with parsley and sliced ​​hard-boiled egg.

For the sauce, cook the beans until they soften. Drain the beans and keep the water. Mix the beans with coconut milk. Add sugar, salt and lemon juice. Mix in a blender. Pour into the saucepan and put on the stove. Cook for two minutes until bubbly, then set aside. Cut the onion into thin pieces and fry in a pan with 1 teaspoon corn oil. Add Mexican chili powder. Stir together for 1 minute; Then add to the bean mixture.

For our The Kitchen Shelf series, CPR News wants to learn about other local Colorado cookbooks, and we want your help.

Snap a picture of the cover and tweet @cprwarner or email [email protected] whether your cookbook is collecting dust on a shelf or a buttered workhorse on the countertop.

We’d love to share more of these family recipes and the stories behind them.

Heat and haze cause front air quality to drop below some of the worst...